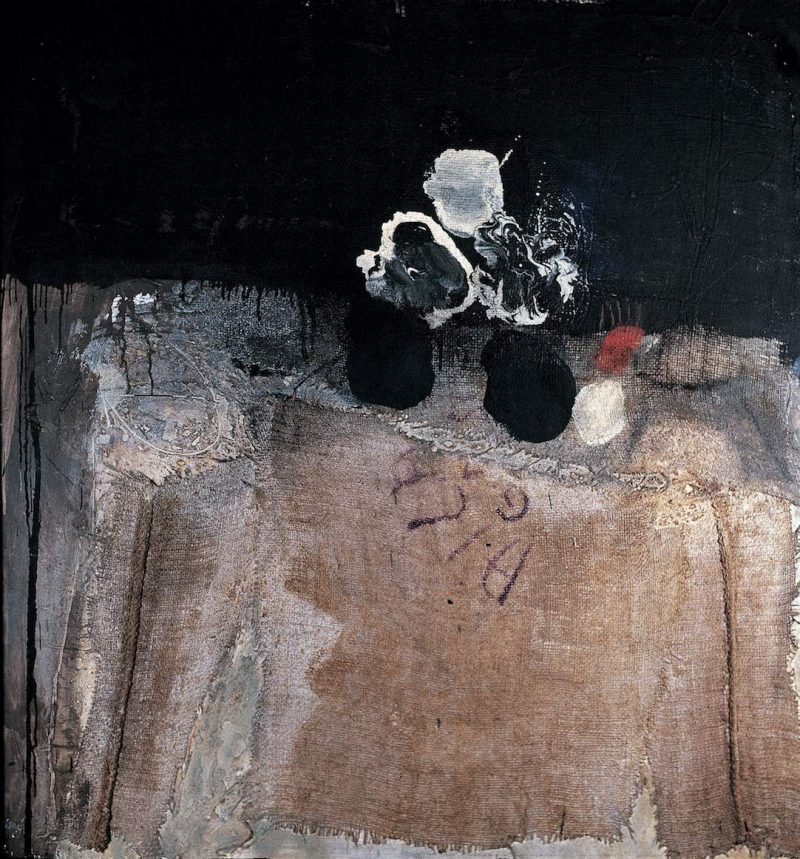 Still lifes were always a subject of predilection for Antoni Clavé. In Spain before 1939, in Paris after his arrival following the defeat of the Republican army. If the influences are in order (surrealist, post-impressionist, classic with homages to Zurbaran…) the theme continues to the point of meeting the first preoccupations of the artist. From 1957, Clavé used pieces of carpet unearthed at flea markets as materials for his paintings. He chose to either completely recover them or on the contrary to leave a little piece in reserve that would be fully integrated in the composition of the picture. The theme of still life in this case became a pretext. Passing figuration, the assembling of different constituent elements of the subject depicted finishes with the forming of a fish or a bowl of fruit in the eye of the spectator.

En toile de sac dates from 1964. Clavé pushed his work on still lifes to its pinnacle as the material becomes the subject. The work is in reality far more than the end of a cycle, it is a transition towards his work on blacks and the ordeal of night.

“A great painter plays depths against surfaces. Darkness doesn’t only serve Clavé to cast out an excess of colours, to substitute sounds for silence, but to deepen its reflection in the sense of a greater starkness, with a more lucid inwardness (...) Clavé understood to which point naturalist fiction is a ploy, except for those who attribute to it a maximum of truth, he chooses the real as a pretext for analysis, and breathes life into its meaning.” (P. Cabanne)