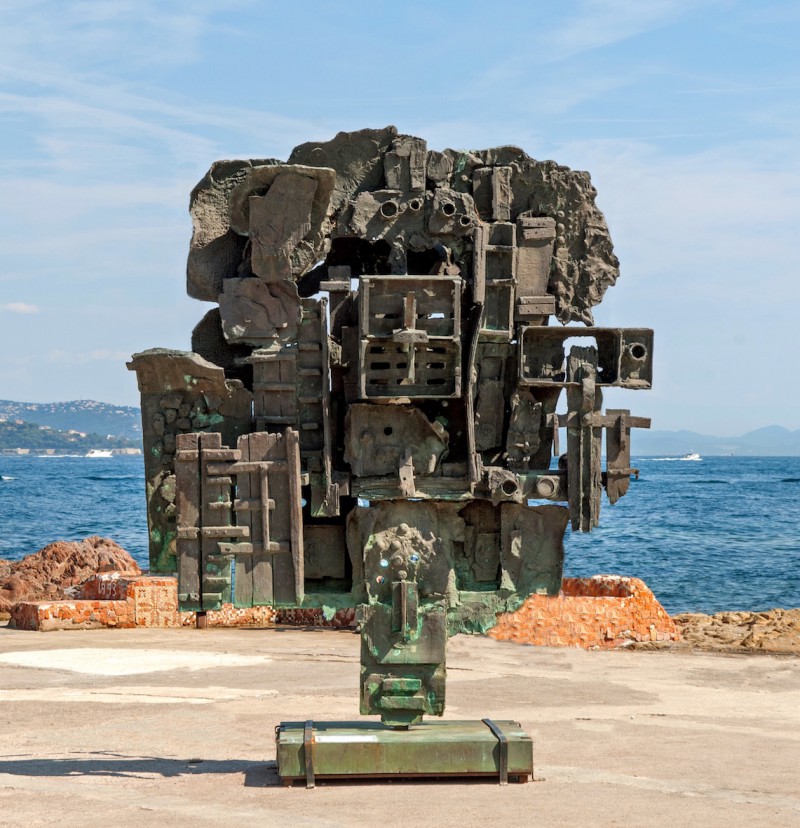 This monumental sculpture illustrates the theme of the warrior and hails directly from the Spanish pictorial tradition that begins with Velasquez and which is a major reoccurring theme in Antoni Clavé’s work – in painting as early as 1958 and as of 1960 in sculpture as well. Giulio au bouclier is the monumental and highly elaborated version of an earlier warrior sculpture of a little over thirty centimeters tall that was cast in bronze in 1960 and titled Jules III.

When looking closely at Giulio au bouclier, the viewer discovers a complex accumulation of salvaged objects and material. Stepping back a bit, the silhouette of a figure protected by a shield and armed with a mace or an ax slowly reveals itself. A wooden crate defines the face, which is encircled by gigantic armor. This colossal armor is made up of bits of handcrafted woven straw carpet, a fragment of fencing reed, wooden crates, cardboard boxes, strips of plaster, metal elements, ropes and string, pieces from a wooden door. The artist has also integrated the casts of objects - details that hail from other sculptures done in lead that had been created thirty years earlier (from the series Empreintes). By casting this sculpture in bronze, this eclectic assembling of derisory objects is transformed into a veritable armor of war, worthy of a futuristic knight or a super powerful droid.  In this way the important role of the founder is underscored as well, for it is the founder who, in addition to transposing the variety of original textures into bronze, bestows upon this metal warrior all of his nobility and strength.