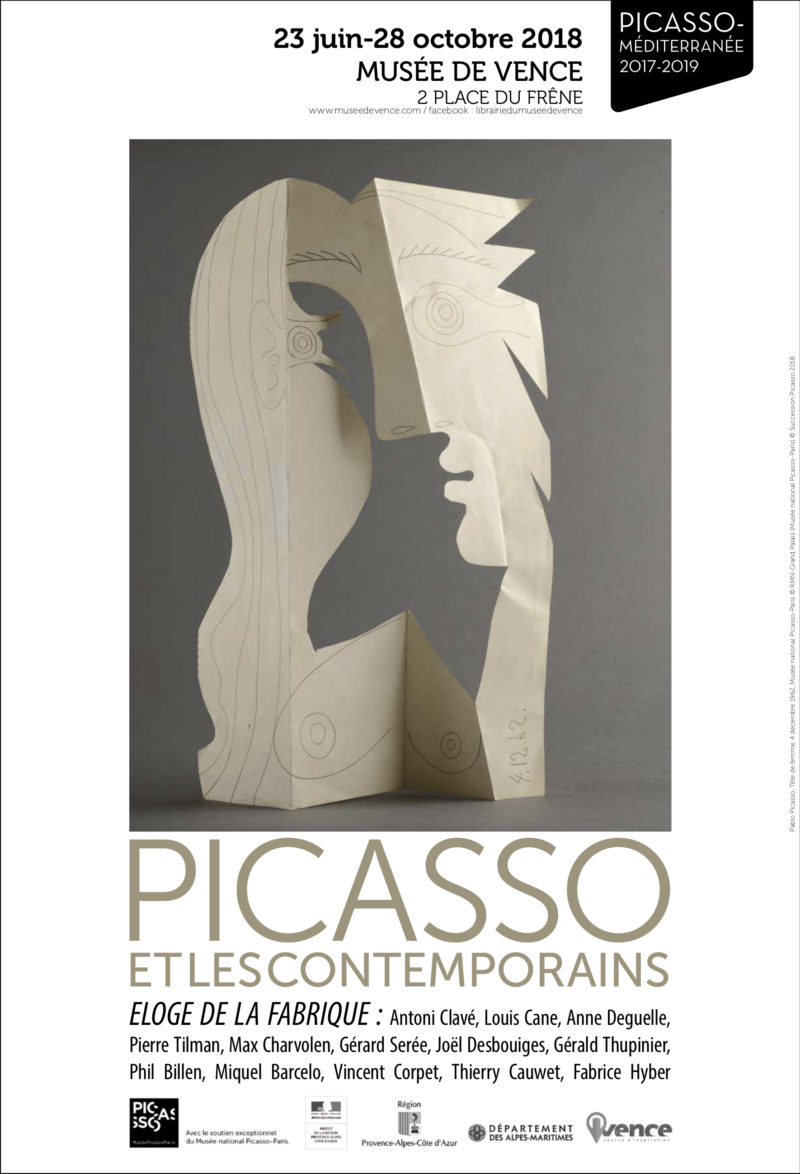 At the occasion of « Picasso Méditerranée 2017-2019 », the Museum of Vence introduces us to an exhibition presenting the influence of Picasso with a new approach (till October 28). This exhibition showcases sculptures from the Master created in the 50s and 60s (which are on loans from the Picasso Museum Paris) alongside with works by 13 contemporary artists. These “self-made” objects highlight the intuitive relationship the Master had with simple and basic materials. The economy of means contrasts with the expressionist and inventive fervour drawn with the lines and forms, with the full and empty spaces. The works by Picasso are in the middle of the seven exhibition rooms and are all responding to the works by artists from different generations, from various obedience and with different tastes. The works by Antoni Clavé, whose meeting with Picasso was decisive, are here at the start of the exhibition.

Five works by Clavé are shown: three “Instruments étranges” – Instrument en carton, Instrument muet and Etrange instrument (1962-1976) – and two sculptures, Masque au cageot (1963) and On dirait un guerrier (1985). The “Instruments”, because of their inner nature, tend to be closer to the sculptures created by Clavé. Clavé masters the art of assemblage, he likes accumulating various textures and transforming abandoned objects, which were dear to his illustrious predecessor. No one would be able to play with these three improbable instruments, made out of bits of cardboard, wood, drawer frames, boards, strings, staples and nails. Clavé is a poet, he plays around with poor materials, he twists them in order to rehabilitate them better. Made out of bronze, Masque au cageot (1963) is more of a traditional sculpture. But again, it is the result of assembled materials. A first small crate contains a round and flattened plaster mask; the small crate is then positioned into a big one, which shape has been altered by the weight of the vegetables it used to contain or because of the time it was left aside in the artist’s studio. One eye is closed while the other one is emptied. On dirait un Guerrier (1985) is a bronze sculpture representing a hieratic character, this soldier is being made out of two parts of a wooden board, a torn and old mop, iron wires and a few nails. The warrior is a recurrent form in Clavé’s oeuvre. It first appeared in his paintings in 1958 and in his sculptures in 1960. The first works broaching this theme were of small size rather, becoming bigger and bigger over time, and reaching a height of 3,8 meters in 1991. 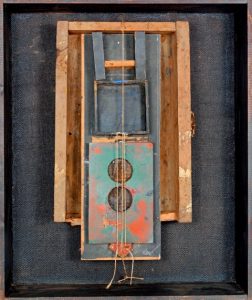