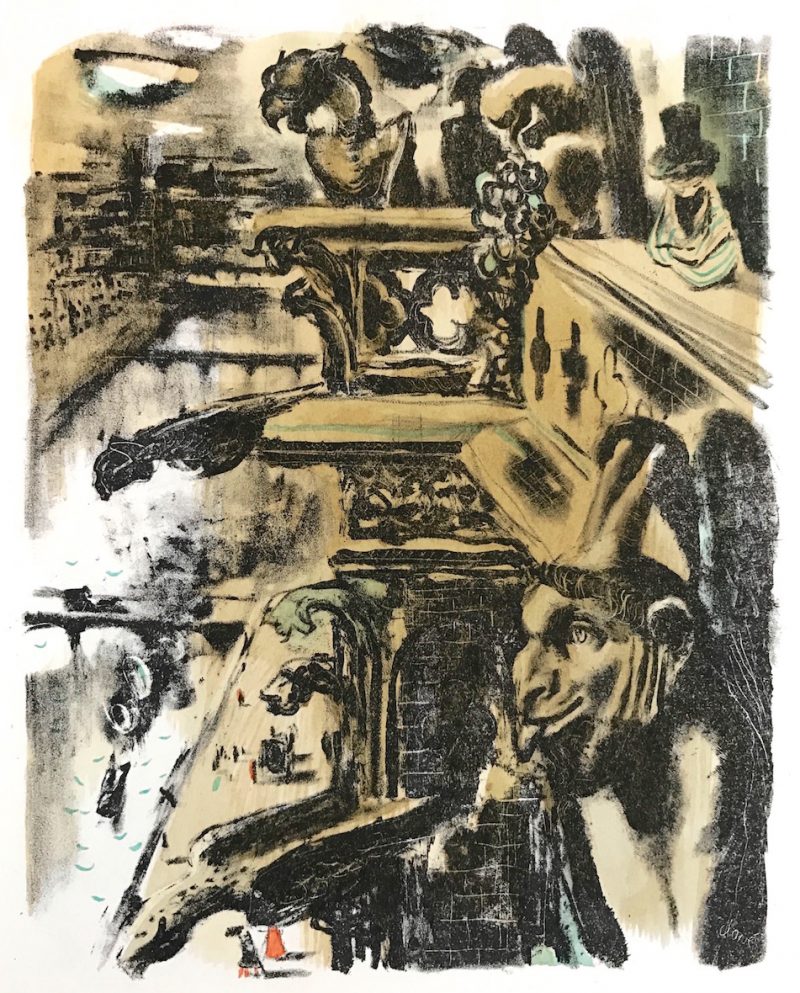 No need to see his entire façade, its two imposing towers or the silhouette of the chevet of the church to immediately identify the cathedral Notre-Dame de Paris. The gaze and the melancholic pose of the horned monster, which maliciously sticks its tongue out leaves no doubt: we are on the gallery of the northern tower, and in front of us is the very famous gargoyle contemplating the city. A man is leaning on the balustrade in the background.  With his top hat on, he as well seems absorbed by the panorama. The composition of this lithograph is based on the very famous photo taken by Charles Nègre, “The Stryge” (1853).

The engraver Meyron gave the name “The Stryge” not long before Nègre took the photo. This sculpture has been so reinterpreted and spread out that, to some extent, we can see it as the ancestor of logos and brands that are everywhere nowadays. Violet-le-Duc, in charge of the restoration of Notre Dame de Paris alongside with Lassus from 1844 on, invented this statue, which was put in place in 1850-51. This construction work ended in 1864, and the metamorphosis of the cathedral is such as being later called a restoration-recreation. The sculpted “beast” is not a gargoyle anymore, since it doesn’t evacuate the rainwater. And its posture is drastically different from the traditional one of the medieval sculptures. Rather, it seems like this demon in stone is straightened as to contemplate Paris well. This strange creature seems to be mostly influenced by Victor Hugo: he has the tonsure and the melancholic pose of Frollo right before he died, as well as Casimodo’s deformity and its name is close to ‘strige’, the witch, present when Esmeralda was accused.

Clavé’s work illustrates the poem Notre-Dame de Paris, written by Gérard de Nerval. It is extracted from a volume of poems, Paris, âges et visage (1943), focused on Paris and chosen by G. Jean-Aubry. Among the selection of emblematic poets are Baudelaire, Hugo, Gautier, Nerval or Verlaine. Clavé, among others, illustrates this book with lithographs. Choosing a Spanish republican in exile is definitely a political act. Of course, violence is neither expressed in the poems nor in their illustrations. The political message is subtler, because it needs to pass through the censors. The iconographical choices are obvious and here the Stryge personifies the cathedral. But this specific representation makes us wonder: is the Stryge (with its tongue stuck out) an allegory of lust, a demoniac and insatiable monster representing Occupied France, or on the contrary, is it a meditative and philosophical figure, above earthly disruptions? Two examples of reappropriation: Brassaï in its book “Paris de nuit” (Paris by night) in 1932-33 and Chagall in 1953 “Le monstre de Notre-Dame” (the monster of Notre-Dame).