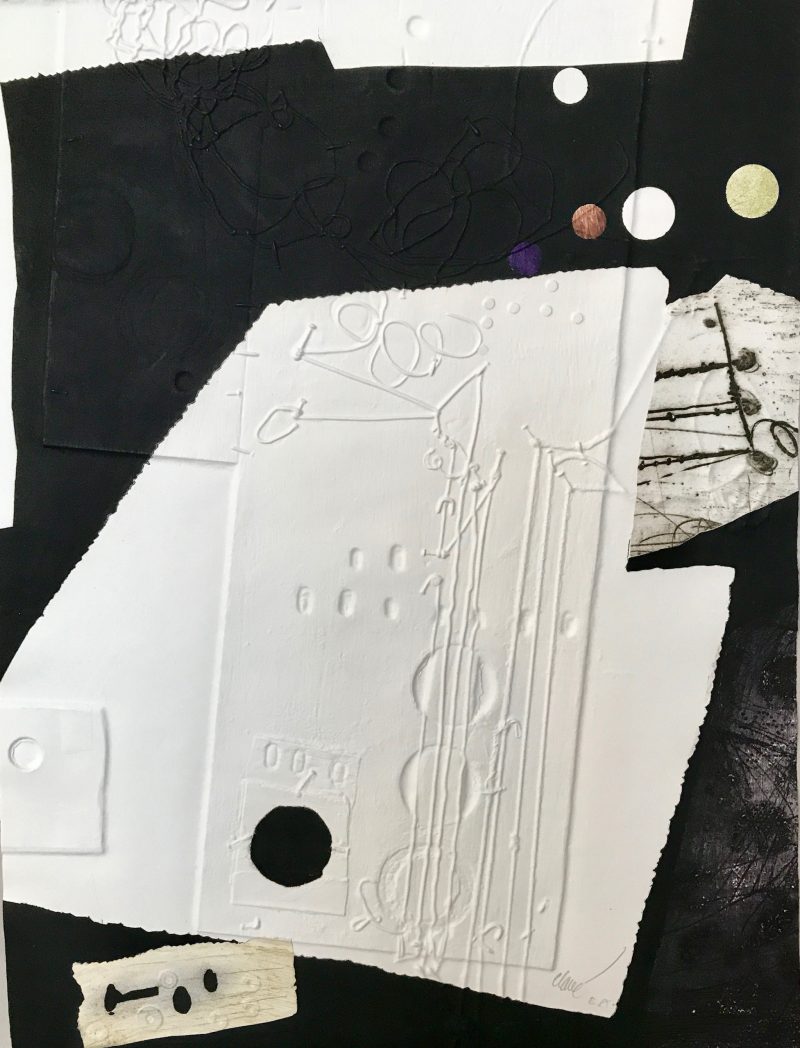 Clavé uses the technique of the assemblage in his œuvre sculpté and œuvre gravé. It consists in assembling ripped, embossed and juxtaposed papers with ropes, strings and nails, these motifs and matters adhering to the carborundum. The carborundum and the goffering are creating texture effects and depth onto Clavé’s prints, hence allowing them to move beyond strict bi-dimensionality. This series of prints, these « Instruments », are to be understood in the truest sense of the word; they are indeed created to serve the art lover at first. In a 1978 interview, focused on Clavé’s exhibit at the Musée national d’art moderne – Centre Pompidou, Clavé explains to Alain Mousseigne the origins of his “Instruments de musique”: “Because of a commission, which I was considering as a drudgery I could not turn down since it was a request from an editor I was working with often. He wanted a print broaching the subject “La Musique” (music) because he was preparing an exhibit around this theme. I didn’t know exactly what to do until I came across a zither…I had been owning it for twenty five years at least, but I wasn’t paying attention to it anymore because it was part of this mess that reigns in my studio. It all came out of that. When I started working on this plate which was supposed to be used for this embossing, it triggered a desire to push the practice further… (…) I had left out some of these “objets” since 1962. So I turned them into “Instruments” in 1977. And I enjoyed it to the point of deciding to produce a whole series.”

Clavé is here so humble that one forgets that this practice makes him a descendant of Orphée, this hero who achieved to seduce animals, win over the mermaids and move inanimate beings. It is indeed truly about that, when Clavé creates his musical variations, these three-dimensions lyre-alike objects or these carborundum prints.