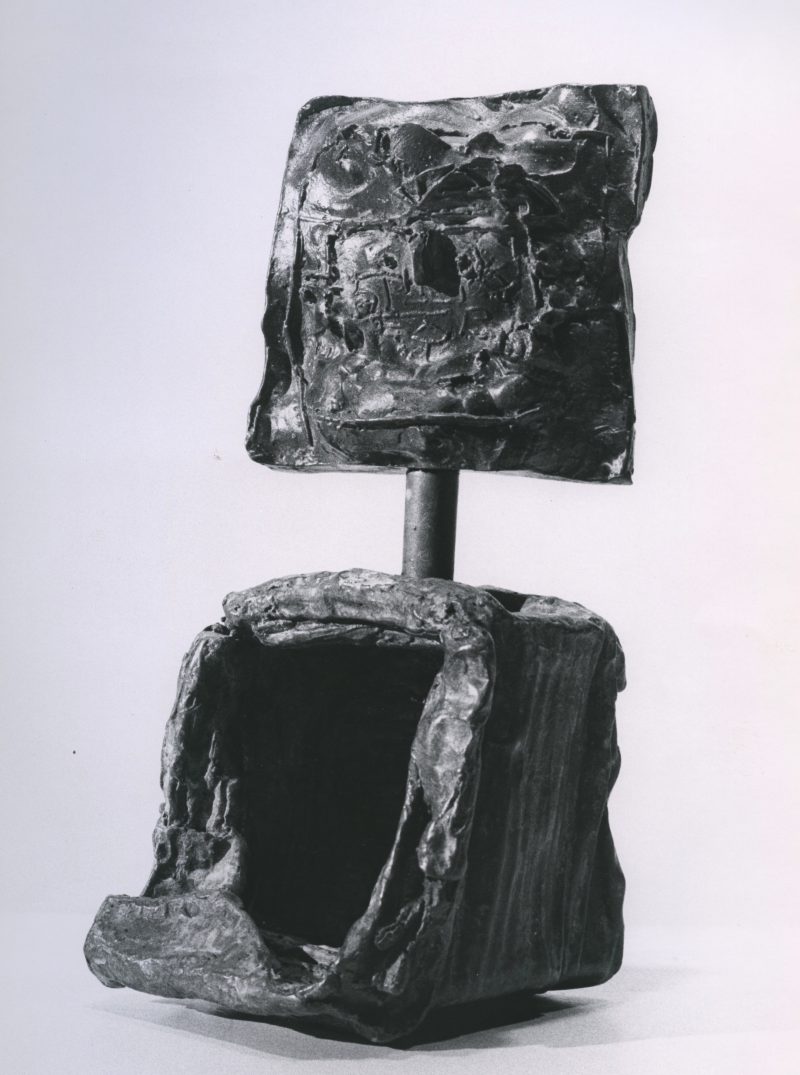 All Souls’ Day happens on November 2 and is the next day after All Saints’ Day.The calendar is the perfect pretext for us to talk about this sculpture by Clavé. This work is unusual, especially since Clavé refers only rarely to religion in his work’s titles. Reliquaries are objects containing remains of a Saint’s body, or some of their possessions, which have or had cult status. They contain the miraculous presence of the Saints. In the Middle Ages, they proliferate in Christianised Europe. They can be of various forms: shrine, liturgical objects, carved statues or on top of a recess, which shelters the relic (reliquary busts), jewels…they can be of all sizes, either private or public devotional objects. Reliquary art transcends and sublimates death.

Religion has never been part of Clavé’s art. He was an atheist. Artistic culture in the West has however long been embedded into Christianity (and Clavé went to evening classes at the Beaux-Arts in Barcelona). Christianity is traditionally important in Spain and there is no doubt Clavé saw reliquaries such as those that the National Museum of Arts shows (see photo on the right). In these two cases a sculpted and painted wooden bust is carved and presents the relic.

The phenomenon goes beyond Christian societies only. Whatever the relationship different religions have with images, believers are in need of conveying their spiritual aspirations and maintain the link with those missing.

In the rich collections of the Musée du Quai Branly there is this Teke reliquary – the Teke are from central Africa, across the borders of the Democratic Republic of the Congo, the Republic of the Congo and Gabon – once owned by Michel Leiris. This is again an anthropomorphic representation, in which a niche was carved to present a cult object. Museums are now showing these objects empty, with no link to the place or rituals they were originally part of. They are desacralized, with no specific function anymore.

The reliquary by Clavé also seems empty and with no use at first glance. It is of small size (20 x 12 x 10 cm) and also anthropomorphic: the face is clearly recognizable in the upper part, a metal rod represents the neck, which is liked to the lower part presenting the bust.

The proportions used here are differentiating themselves from the above-mentioned objects: the sculpture is in two parts and the niche is as big as the face. The hollowness is central here. Is it a way for Clavé to deny any power to human remains? Is it a clear denial of holiness in general? Or maybe does it reject some kind of religiousness that may sometimes be seen as superstition?

A reliquary deprived of its relic; this small bronze sculpture questions the spectator and becomes part of his philosophical reflexions and personal beliefs.